A coalition of nine independent Omaha live event promoters will be requiring vaccinations at their concerts.

Concerts and other events from Third String Midwest, Nice Enough ENT, Aorta, Midwest Elite, Freedom Minds, Surreal the MC, Blackheart Booking and Four Winds will require proof of vaccination or a negative COVID-19 test, according to a letter released by the group.

“As promoters, we have the tough responsibility to not just look after a portion of attendees, but ALL of our attendees,” the statement reads. “We carry this responsibility in our hearts and we hope you agree with the precautions we are taking to keep everyone safe.”

The group of Omaha promoters books concerts at numerous venues including The Waiting Room Lounge, Reverb Lounge, Slowdown and others as well as venues in nearby cities such as Kansas City and Des Moines.

As of this writing, those venues have not published their own policies requiring vaccinations or proof of a negative test.

The Omaha promoters require proof of a vaccination or proof of negative test within the past 48 hours. Tests are available at many chain stores and pharmacies. You’ll also be asked if anyone in your household has COVID-19. Masks are not require but are “highly encouraged.”

“Get your shot, get your test,” the letter says. “Let’s get back to supporting venues and artists alike. It’s time to return to live music safely. We hope you’ll join us.”

The local promoters are following others — promoters, venues and touring artists — that are similarly requiring vaccinations or negative tests to attend their concerts.

Concert tours from artists such as Jason Isbell and Maroon 5 as well as festivals such as Milwaukee’s Summerfest have made such an announcement as have notable venues such as First Avenue in Minneapolis and the Troubadour in LA.

Notably, AEG will require proof of vaccination or a negative test at all of its venues including the Bluebird Theater in Denver, Webster Hall in New York City and festivals such as Coachella and Firefly. The second-largest music production company in the world — behind only Live Nation — said a few states may override their plan or artists may choose not to play there, acccording to NPR. “But we know that using our platform to take a strong position on vaccinations can make an impact,” said AEG Presents General Counsel Shawn Trell in the press release.

Live Nation, which promotes shows and owns dozens of venues, sent out a letter that put it up to artists to require proof of vaccination or a negative test, according to Variety. The same letter requires “all employees” to be vaccinated in order to work an event or show up at its offices, they said.

“Our business and our industry is about uniting people and vaccines are one of the greatest tools for making sure that everyone can continue to enjoy live music together. We’ve gone through a lot this past year and it’s remarkable to see how far we’ve come,” reads a portion of Live Nation’s letter.

Read the entire letter from the nine Omaha promoters: 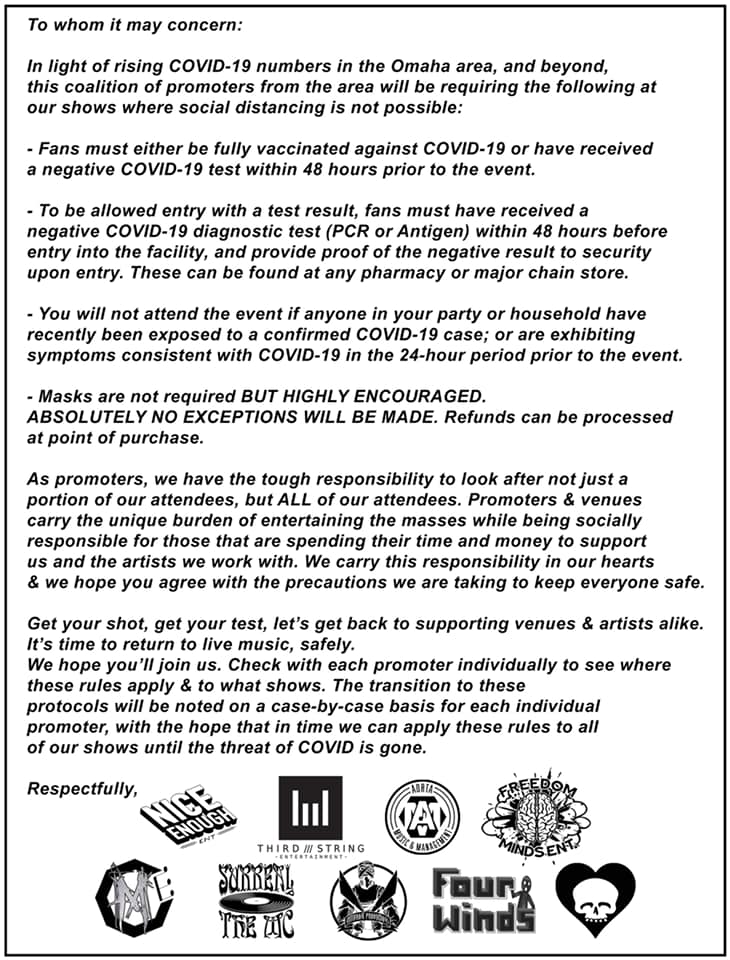